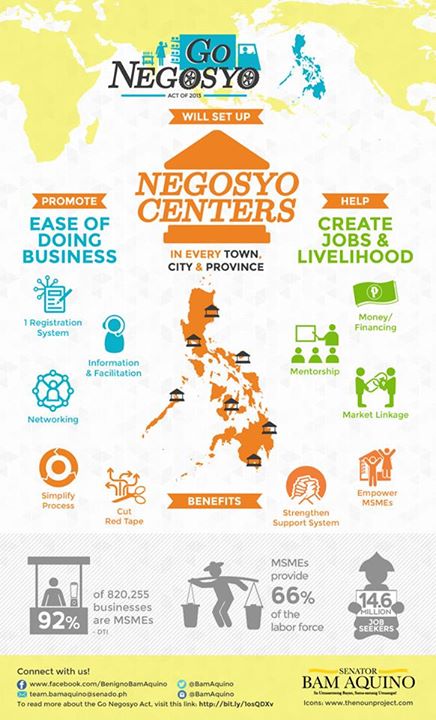 The Go Negosyo Act is now closer to becoming a law after it hurdled the bicameral conference committee.

Senator Bam Aquino, chairman of the Committee on Trade, Commerce and Entrepreneurship, and his House counterpart, Las Pinas Rep. Mark Villar, have adopted the Senate version of the Go Negosyo Act authored by Aquino.

On the last day of session, the Senate has ratified the bicameral conference committee report on the Go Negosyo Act. It will be transmitted to Malacanang for President Aquino’s approval.

“No amount of words will get the people’s trust back in the Senate,” Aquino said.

“If our countrymen would see that we have been working for them despite the scandals, maybe at some point, we would be able to gain their trust again.”

“With the imminent passage of the Go Negosyo Act into law, small businessmen – micro, small and medium enterprises (MSMEs) are given a much needed boost that will lead to job creation in different parts of the country,” Aquino said.

Aquino stressed the importance of the Go Negosyo Act, saying 66 percent of jobs in the labor force are generated by the MSME sector, which in turn comprises 99 percent of all enterprises in the Philippines.

“The Go Negosyo Act gives Filipinos – from a simple housewife to ordinary employee – a chance to establish their own business that will help sustain their everyday needs and for their families,” the senator said.

The Act mandates the creation of Pinoy Negosyo Centers, under the Department of Trade and Industry (DTI), in each city and municipality around the country. These Pinoy Negosyo centers are meant to make it easier for entrepreneurs to register and start up their businesses, as well as gain access to sources of financing.