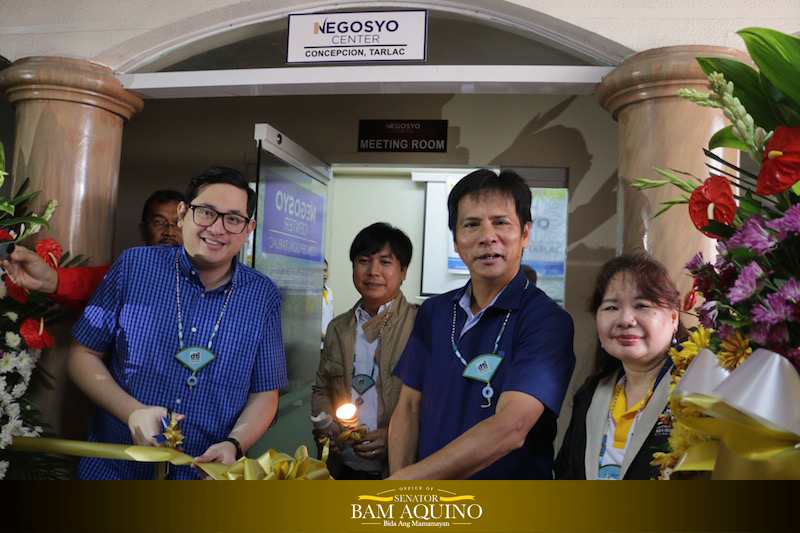 The number of Negosyo Centers in the country has breached the century mark with the opening of its 101st branch in Concepcion, Tarlac today (Friday, Oct. 2).

“We are very happy to surpass our target of 100 for the year with three months left. With the rate we’re going, we are on track of reaching 120 before 2015 ends,” said Sen. Bam Aquino, chairman of the Committee on Trade, Commerce and Entrepreneurship.

The Concepcion Negosyo Center, located at the ground floor of the Concepcion Municipal Hall, is the second in the province and sixth in Region III, next to Tarlac City, Balanga in Bataan, Olongapo City, Baler and Maria Aurora in Aurora and Malolos in Bulacan.

Sen. Bam, who hails from Concepcion, will

Top Department of Trade and Industry (DTI) officials and representatives from private stakeholders, such as the Concepcion Business Club, Philippine Chamber of Commerce and Industry-Tarlac and the Small and Medium Enterprise Development Council (SMEDC) are also expected to attend the event.

Sen. Bam is the main author of Republic Act 10644, or the Go Negosyo Act, which mandates the creation of Negosyo Centers in all provinces, cities and municipalities in the country.

The Negosyo Center will provide access to linkages to bigger markets and financing for businesses, and a unified and simplified business registration process, thus helping ease of doing business and fast-track government processes in putting up a business.

The senator lauded the DTI for making sure that the Go Negosyo Law is being fully implemented for the welfare of micro, small and medium enterprises (MSMEs) in the country.

“I would like to thank the DTI for tirelessly working for the full implementation of the Law and for allowing my office to closely coordinate in the establishment of Negosyo Centers in different parts of the country,” Sen. Bam said.