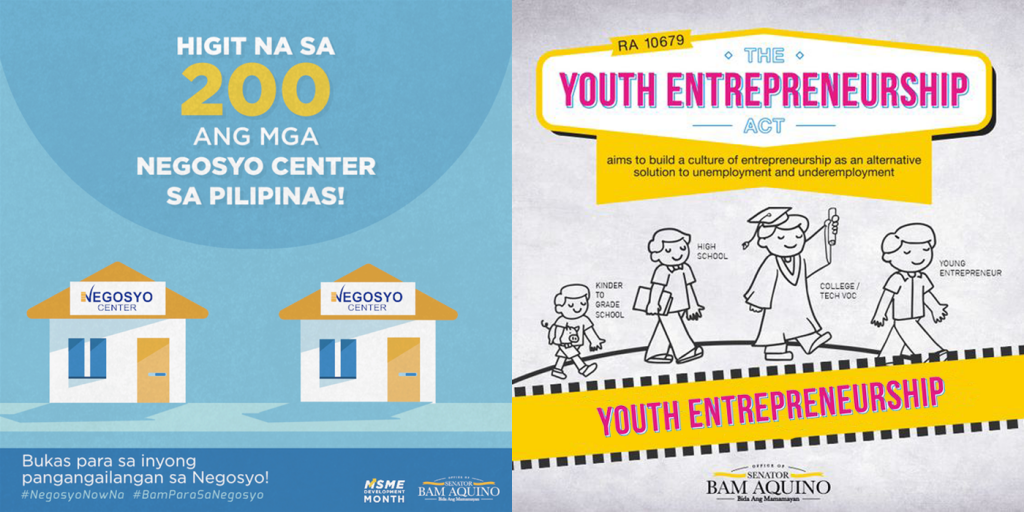 Sen. Bam Aquino believes two of his laws in the 16th Congress — the Go Negosyo Act and the Youth Entrepreneurship Act – will help address the unemployment problem in the country through the development of micro, small and medium enterprises (MSMEs).

“These two laws are aimed at generating fresh jobs and other livelihood opportunities by providing MSMEs with the right support to help them grow,” said Sen. Bam, chairman of the Committee on Trade, Commerce and Entrepreneurship.

“By giving MSMEs a conducive environment where they can succeed, confident that they can help generate fresh jobs and other livelihood opportunities for Filipinos,” he added.

Trade Secretary Mon Lopez, for his part, said the agency will be giving an extra push in creating more entrepreneurs and registering more enterprises that will employ more Filipinos.

The DTI will also focus on helping MSMEs on many aspects, in terms of money and market access, according to Lopez.

Sen. Bam’s pronouncement came after a Social Weather Stations (SWS) revealed that some 11 million adults were without work in the first quarter of 2016, about two million more than the previous quarter.

At present, Sen. Bam said 252 Negosyo Centers are already up and running, catering to the needs of micro, small and medium enterprises (MSMEs) in different parts of the country.

The Youth Entrepreneurship Act, for its part, encourages young would-be entrepreneurs to establish their own business by providing them access to capital and other support.

The law creates financial literacy modules in all levels of Philippine education, to inculcate a culture of enterprise development among the Filipino youth.

Aside from the Go Negosyo Act and the Youth Entrepreneurship Act, Sen. Bam also worked for the passage of other MSME-related laws such as Philippine Competition Act, Microfinance NGOs Act, Credit Surety Act and the Foreign Ships Co-Loading Act or Amendments to the Cabotage Policy.

In the 17th Congress, Sen. Bam has already filed the Senate Bill No. 169 or Small Business Tax Reform Act, which provides small businesses with lower income tax rate, VAT exemption and other privileges.

Sen. Bam has also submitted Senate Bill No. 170 or Trabaho Center in Schools Bill to create a job placement office or Trabaho Center to assist Senior High School graduates who opt to find employment and help them find those opportunities.