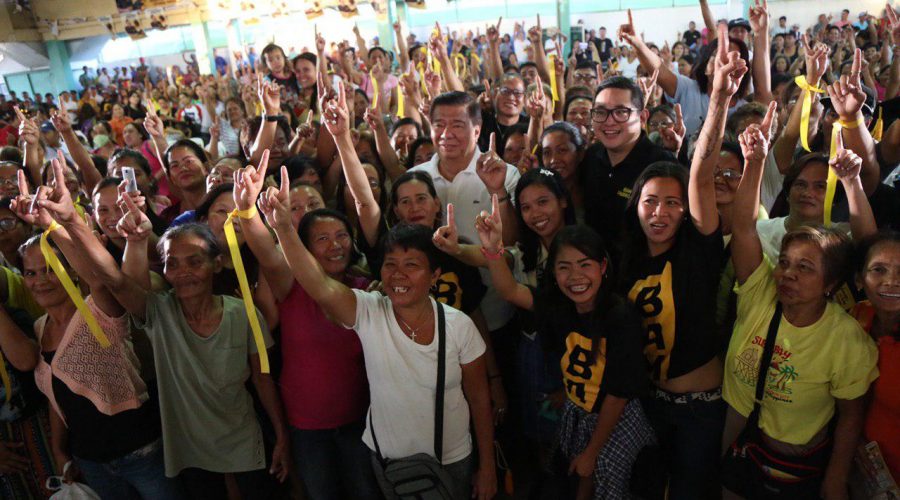 Sen. Bam Aquino’s re-election bid in the May elections received a major boost after he was endorsed by Minority Floor Leader Franklin Drilon in his hometown of Iloilo City.

In a rally in Iloilo City on Wednesday, Drilon called on his fellow Ilonggos to make Sen. Bam their No. 1 senator in the upcoming polls.

“He’s one of the brightest Senators I’ve worked with. He’s sincere. He’s a man who is sincerely concerned for our welfare- especially sa future ng kabataan,” added Drilon, saying Sen. Bam is the first senatorial candidate in the May elections that he’s endorsed.

Drilon described Sen. Bam and the Aquino family as a dependable ally in the development of the province of Iloilo, citing some projects that were funded during the previous administration.

Drilon also laid down Sen. Bam’s legislative accomplishments, saying he pushed for the passage of several important laws that focus on the welfare of the Filipino people, including the free college law that is being enjoyed by thousands of Ilonggo students.

In a separate interview, Sen. Bam thanked Sen. Drilon for his overwhelming support for his candidacy. 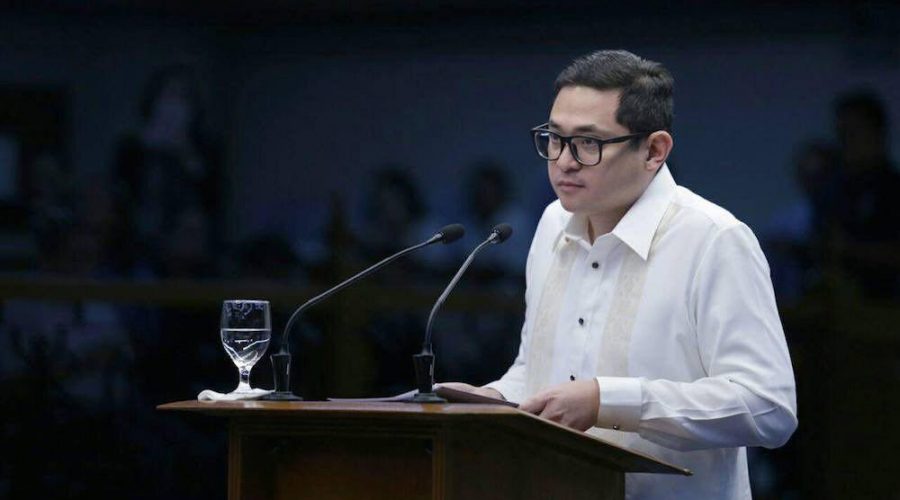 Sen. Bam: Only an independent Senate can push country forward, protect its citizens

Only an independent Senate that is not beholden to anyone will push the country forward as it will work for the interest of the Filipino people, Sen. Bam Aquino stressed.

Sen. Bam said an independent Senate will prevent the passage of any law that is detrimental to the welfare of the public, like the controversial Tax Reform for Acceleration and Inclusion (TRAIN) Law that burdens the Filipino people with high prices of food and other goods.

An independent Senate also ensures check and balance between branches of government and serves as watchdog against corruption, guaranteeing that those involved in anomalies will be punished.

An independent Senate will also guarantee that the will of the people is being followed, and not just serve as a rubber stamp of the administration.

Also, attempts to change the 1987 Constitution to remove term limits of elected officials and change the system of government to fit their political agenda will have no chance under an independent Senate.

Sen. Bam stressed that an independent Senate can be achieved by selecting candidates that will work for the welfare of the people and not serve the interest of the administration.

In his almost six years as senator, Sen. Bam has 40 laws to his name, including the landmark Free College Law that he pushed as principal sponsor during his time as chairman of the Committee on Education. 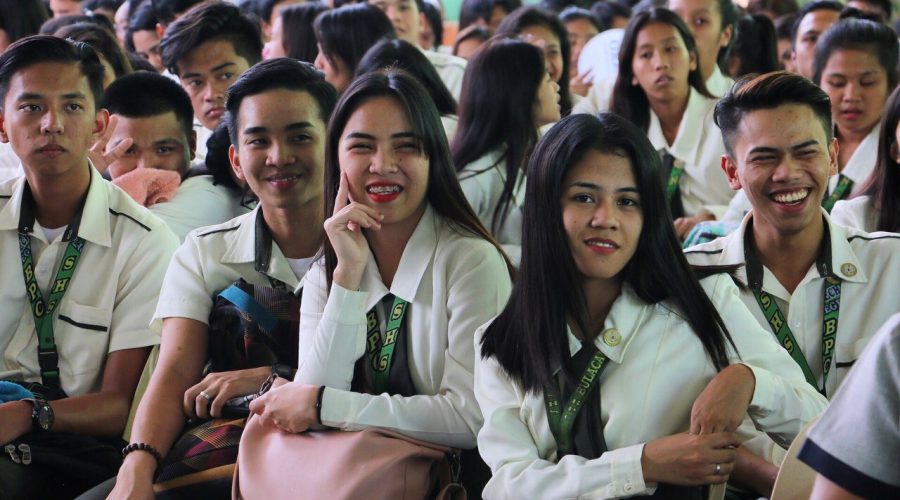 Sen. Bam Aquino believes the government can fund free college even without the Tax Reform for Acceleration and Inclusion (TRAIN) Law, insisting that President Duterte is being fed wrong information by his economic managers.

In fact, Sen. Bam said that in 2017, the Senate allocated funds for the first year of implementation of the free college law for 2018, even before the TRAIN Law was passed.

Sen. Bam emphasized that the government economic managers are trying to divert funds for other purposes, based on an earlier pronouncement by Sen. Panfilo Lacson that he has identified around P410.98 billion from the 2019 national budget allotted for pork barrel.

Sen. Bam has been pushing for the suspension of excise tax on fuel under the TRAIN Law, filing the Bawas Presyo sa Petrolyo Bill last May 2018 to help ease the burden of Filipino people on high prices of food and other goods.

Sen. Bam’s  measure seeks to suspend and roll back the excise tax on fuel under the TRAIN Law once the country’s inflation rate exceeds the government’s target for three straight months. 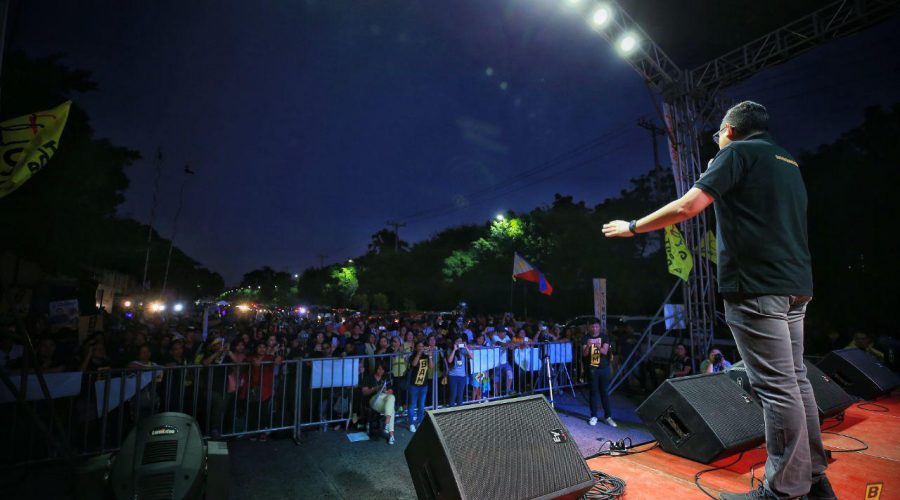 Sen. Bam: Like EDSA, May elections give Filipinos chance to fight for future, welfare of families

While the 1986 EDSA Revolution paved the way for millions of Filipinos to fight for the future of their families, the May elections will give voters a chance to advance the welfare of their loved ones through the ballot, according to Sen. Bam Aquino.

Instead of using popularity as basis for voting, Sen. Bam said Filipinos should pick candidates who will help improve their lives and push for the welfare of their families.

Sen. Bam is confident that his track record in his first term will convince voters to give him a fresh six-year mandate in the Senate.

In his almost six years as lawmaker, Sen. Bam worked for the passage of 40 laws, including the landmark free college law, which he pushed as principal sponsor during his term as chairman of the Committee on Education in the 17th Congress.

Sen. Bam fulfilled his 2013 campaign promise to help boost micro, small and medium enterprises by pushing for the passage of the Go Negosyo Act.

The first law passed by Sen. Bam, the Go Negosyo Act has established more than 1,000 Negosyo Centers in different parts of the country, serving Filipinos who want to start or expand their own business.

Sen. Bam has committed to push measures that will ensure good jobs for all college and K-12 graduates and other educational reforms such as improvement of educational facilities and additional benefits for teachers. 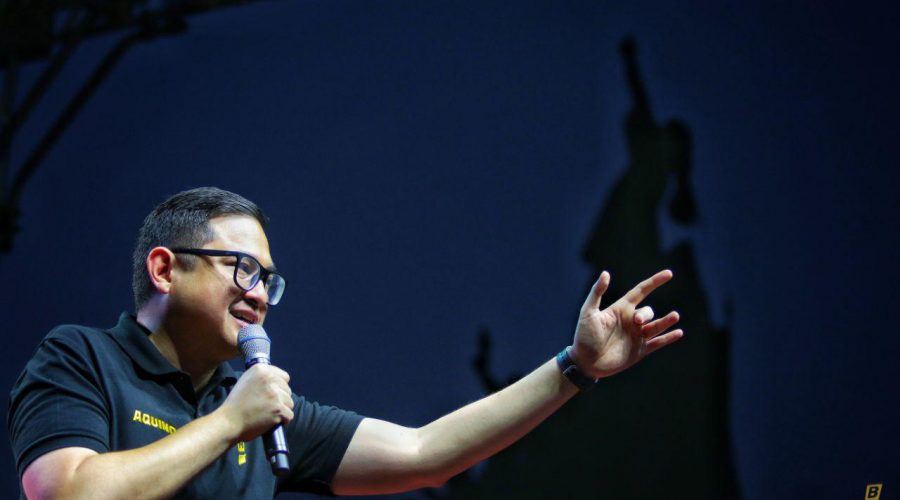 Thirty three years after a corrupt dictator was ousted, Sen. Bam Aquino stressed that another People Power is needed, this time through the ballot, to ensure that no corrupt candidate will be elected to the Senate.

Sen. Bam said the spirit of EDSA 1 should be rekindled amid the corruption issues hounding the government despite the administration’s promise to stay away from officials with even a ‘whiff of corruption’.

Earlier, Sen. Bam called on voters looking for better governance to air their sentiment by selecting right candidates in the May elections.

The senator is optimistic that voters will elect senatorial candidates who have the people’s welfare in mind and will work to uplift the lives of Filipino families. 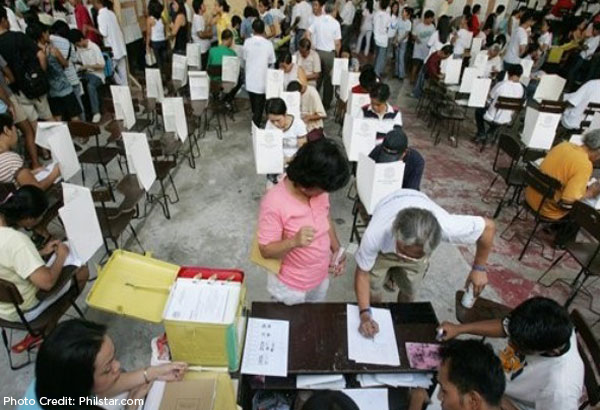 The People Power of today is Vote Power!
This was emphasized by Sen. Bam Aquino as he called on the Filipinos to air their grievances with government through the ballot in the May elections.
“Alam kong nakakatakot ngayon, pero kailangan nating ipakita ang ating tapang sa pamamagitan ng ating boto,” said Sen. Bam.
“I’m hoping come May, iyong lakas ng taumbayan, mapakita ulit,” said Sen. Bam, who is running for re-election under the Otso Diretso slate.
Sen. Bam admitted that being part of the opposition is very difficult during these times, but somebody has to put the government in check and making them accountable for their actions.
“This is a gargantuan task, but still it ought to be done. And somebody has got to do it,” said Sen. Bam.
Sen. Bam is hoping that voters will select senatorial candidates who will work for the people’s welfare and will uplift lives of Filipino families.
The senator said he’s banking on his legislative accomplishments to earn him a second term in the Senate.
In his first term, Sen. Bam has 35 laws to his name, including the landmark free college law, which he pushed as principal sponsor during his term as chairman of the Committee on Education in the 17th Congress.
Sen. Bam also pushed for the passage of the Go Negosyo Act, which has established more than 1,000 Negosyo Centers in different parts of the country, catering to the needs of Filipinos who want to start or expand their own business.
“Unang-una, iyong track record natin, nandiyan naman. Iyong mga natulungan natin sa Free College Law, naririyan na rin po yan,” said Sen. Bam
If he wins a second term, Sen. Bam said he will push for reforms that will ensure good jobs for all college and K-12 graduates and other education reforms such as improvement of educational facilities and additional benefits for teachers. 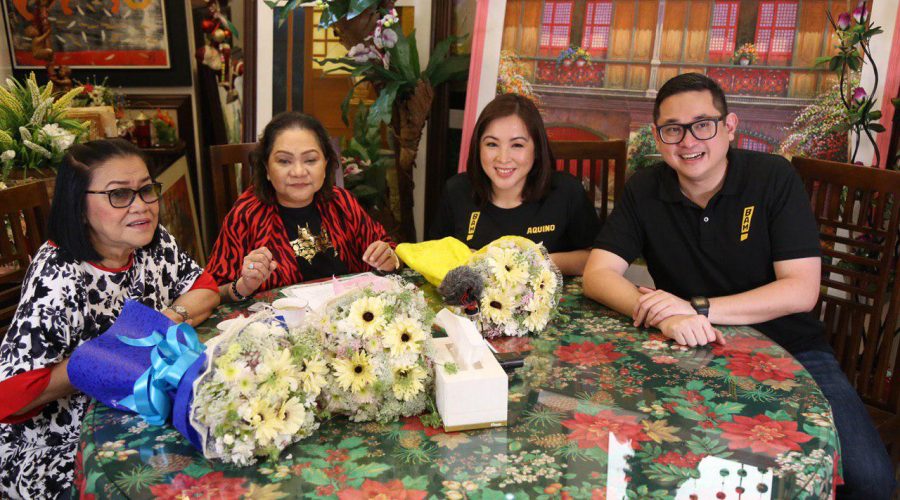 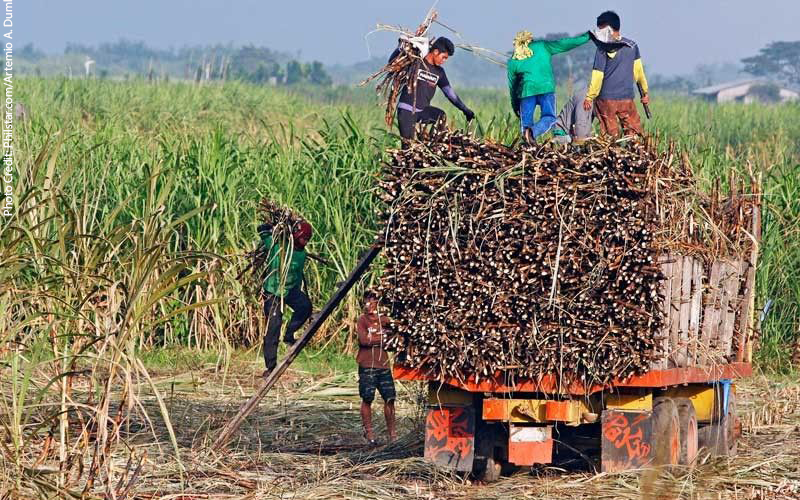 Sen. Bam Aquino stressed that unabated importation of sugar would lead to the death of the sugar industry and affect the livelihood of 90 percent in the sugar farming industry who are land reform beneficiaries.
“Nakababahala ang planong ito ng gobyerno na bahain ng merkado ng inangkat na asukal dahil talo ang ating maliliit na magsasaka at kanilang mga pamilya,” said Sen. Bam, who is running for re-election under the Otso Diretso coalition.
“Sa walang habas na pag-angkat ng asukal, ninanakawan ng kabuhayan ang mahihirap na pamilyang umaasa sa pagtatanim ng tubo,” the senator added.
According to Sen. Bam, if the government pushes through with its plan to liberalize sugar importation, the livelihood of around 84,000 farmers and 720,000 industry workers will be in peril.
Instead of pushing for the liberalization of sugar importation, Sen. Bam said the government should give small farmers the needed resources to improve their livelihood.
“Kailangan natin silang tulungan at alalayan, lalo na at marami sa kanila ay benepisyaryo ng repormang agraryo,” said Sen. Bam.
Earlier, Sen. Bam recently requested to be a co-author of Resolution No. 1014 requesting the government to shelve its plan to import sugar. 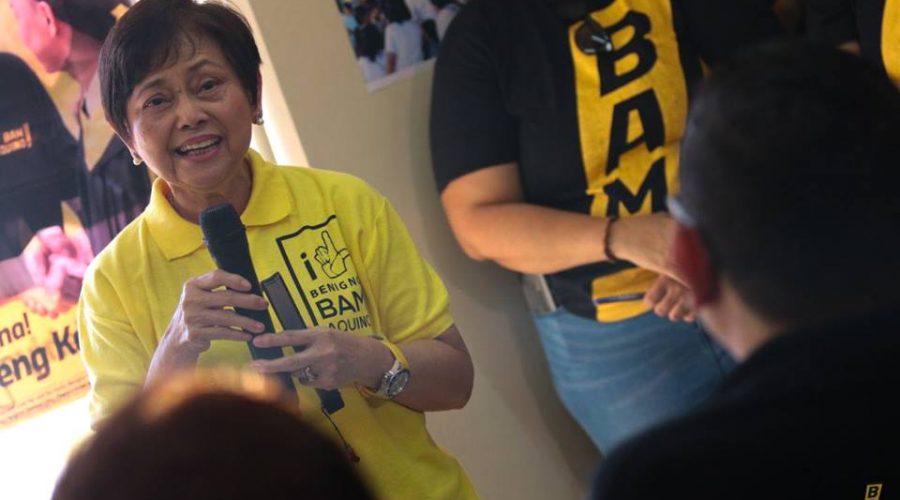 The mother of Sen. Bam Aquino revealed the secret campaign advice that she has given her son for almost 40 years.

According to the 74-year-old Melanie Aquino, the secret language of encouragement that she has always told Sen. Bam, especially when the going gets tough, is “Day one– Unang araw! Bagong araw!”

Melanie is no stranger to politics as she accompanied Sen. Bam, who was six years old then, to different opposition rallies where he was invited as speaker.

Melanie acknowledged that this campaign will be an uphill climb for his son due to the black propaganda and fake news propagated by his online critics, but she encouraged her son to continue the fight.