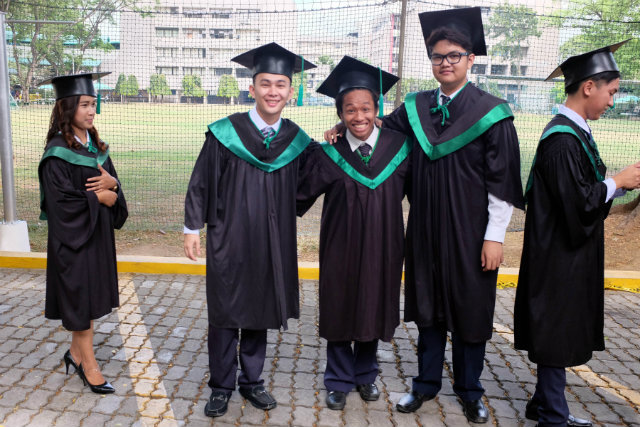 From street child to Atenean: The story of Rusty

CLASSMATES. Rusty graduated from Xavier University- Ateneo de Cagayan with a bachelor’s degree in Development Communication. Rusty was a former street kid who, with sheer determination, was able to get off the street. All photos by Bobby Lagsa

Here is a story of how a street child, exposed to drugs and crime at a young age, went against all odds and graduated from Ateneo

CAGAYAN DE ORO, Philippines – In late 2009, 20-year-old Rusty Quintana lined up at a classroom in Xavier University – Ateneo de Cagayan for a shot at one of the scholarship grants that the university offered.

Though unsure that he would get a chance of entering his dream university, he queued up anyway.

Rechelle Tolinero, a faculty of the Development Communication Department at XU, said that she first met Rusty on that day for an interview for a scholarship grant. “We knew right there that he was different, that there was something about him,” Tolinero said.

Rusty was wearing his best clothes that day – though his best was an almost tattered shirt and faded pants. He did not cut his hair for a while and his thick kinky hair stood out.

A native of the Agusan river in Barangay Florida in Butuan City with lineage from the indigenous Banwahon tribe, Rusty‘s brown skin and hair is hard not to miss.

“When it was his part for the interview, Rusty was quick to point out that if possible, we converse in Bisaya because he cannot speak English,” Tolinero said.

In fact, Rusty did not finish his elementary and high school.

Rusty was only armed with a diploma from the Alternative Learning System (ALS) of the Department of Education, a proof that he is eligible to enter college.

“But what struck us the most is his honesty and straight forward demeanor, when he came here, he had no pretentions that he knew something, or (that) he could speak English, unlike those who came before him in the queue who struggled to speak in English just to prove a point,” Tolinero said.

The kid from the streets 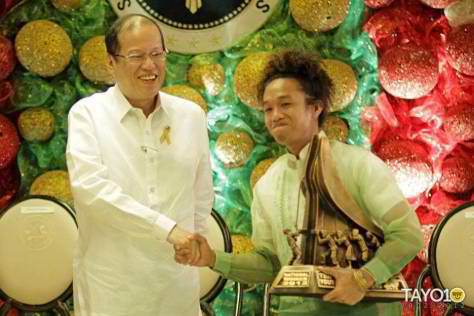 Rusty is a street kid who grew up outside the grand gates of Xavier University, near the historic Plaza Divisoria.

He was just 7 years old when he was plucked out of their home by his older brother, Rodolfo Quintana Jr, and was brought to Cagayan de Oro City in 1996, to get away from their troubled home.

Upon reaching Cagayan de Oro, they lived in shanties near the CDO River. There, Rusty spent his days outside the gates of XU, asking for some change and hanging out at the statue of Ramon Magsaysay.

One day, his brother disappeared. He later learned learned that he was arrested by the police on charges of drug pushing.

Rusty would soon find himself at the Mother Theresa Foundation, a shelter in Upper Puerto, where he spent almost 4 years.

One out of four Filipinos continue to live below the poverty line. The Philippines will not be able to achieve by 2015 its commitment to cut in half those who are living on USD1.25/day or the threshold of absolute poverty.

Such bleak picture from the Philippine government’s own assessment of the country’s development performance is in sharp contrast to the glowing figures of economic growth over the past 6 years. If we add the glowing figures about the increase in assets of the richest Filipinos, one could easily make the conclusion that our country’s economic growth has not been inclusive.

The Philippines is not the only country that is not going to reach its development target of cutting in half their population living below the poverty line. But despite this, the UN High Level Panel of Eminent Persons that was commissioned to study and recommend the world’s post-2015 development goals has made a call for new global partnerships to transform economies, eliminate poverty and achieve gender equality by 2030.

It is in this context that social entrepreneurship is being proposed and explored as a strategy by the First Social Enterprise Advocacy and Leveraging Conference in Asia (SEAL-Asia).

Social entrepreneurship is all about innovative and sustainable solutions to social problems. And in the context of poverty and inequality, social enterprises with the poor as primary stakeholders or SEPPS have emerged as innovative responses to these problems.

These social enterprises engage the poor not only as workers, suppliers and clients but also as partners in their development. At their best and over time, the poor are enabled to become pro-active stakeholders in value chains and economic subsectors; co-owners, managers and decision makers of their own social enterprises; as well as empowered citizens in their communities and society at large.

A survey involving a sample of 32 SEPPS in the Philippines, conducted as part of a multi-country study by ISEA and Oxfam to be shared during SEAL-Asia, shows great potential for this sector to play a key role in addressing poverty and inequality in the next decade. The combined reach of these 32 SEPPS alone reached 2.5 million poor. If we assume that each poor family reached had 2 members, this figure represents about 30% of the estimated number of poor families in 2012.

These challenges are the main drivers why SEPPS and their support institutions in the Philippines have come together to set up two major platforms. One is the Reconstruction Initiative through Social Enterprise (RISE) to make social entrepreneurship a major strategy for building back better in Yolanda affected provinces. The other is the Poverty Reduction through Social Entrepreneurship (PRESENT) Coalition, which is pushing for the enactment of a PRESENT law.

An important recommendation emanating from the Oxfam-ISEA study is informative: “…government and business institutions need to be willing to change the policies and practices that have not worked in favor of the poor, and undertake strategic innovations to support the scaling up of SEPPS.”

A strategic innovation toward this direction is the passage and implementation of the PRESENT bill being championed by Sen. Bam Aquino and Congressmen Teddy Baguilat/Cresente Paez in both houses of Congress.